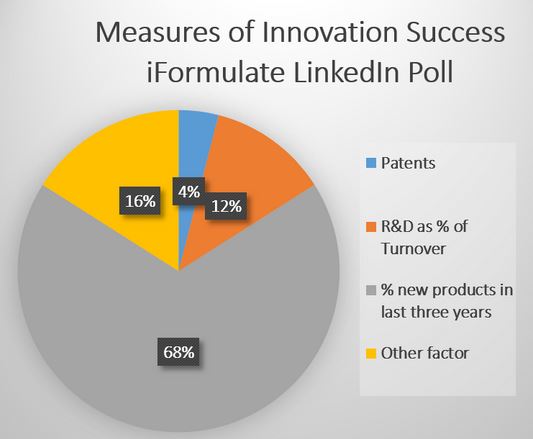 A clear winner from the poll was the opinion that the number of new products introduced was a good metric. Interestingly we saw not one vote for an increase in share price – I wonder how many CEOs of listed companies would agree with that? The comments from respondents suggested that the appropriate measure did depend upon the size and nature of the company in question. For instance a small formulating company may not have a patent portfolio due to the cost of filing and maintaining patents, but the company could still be regarded as very innovative. The lack of patent portfolio does not of course mean that there is a lack of IP.

Thanks to all who took part in the poll. Join the iFormulate LinkedIn Group to take part in our new poll which gives you choices as to what are the major barriers to the introduction of nano-materials. At present stability in the formulation seems to be the biggest factor but that can all change. As the saying goes, “you decide!”